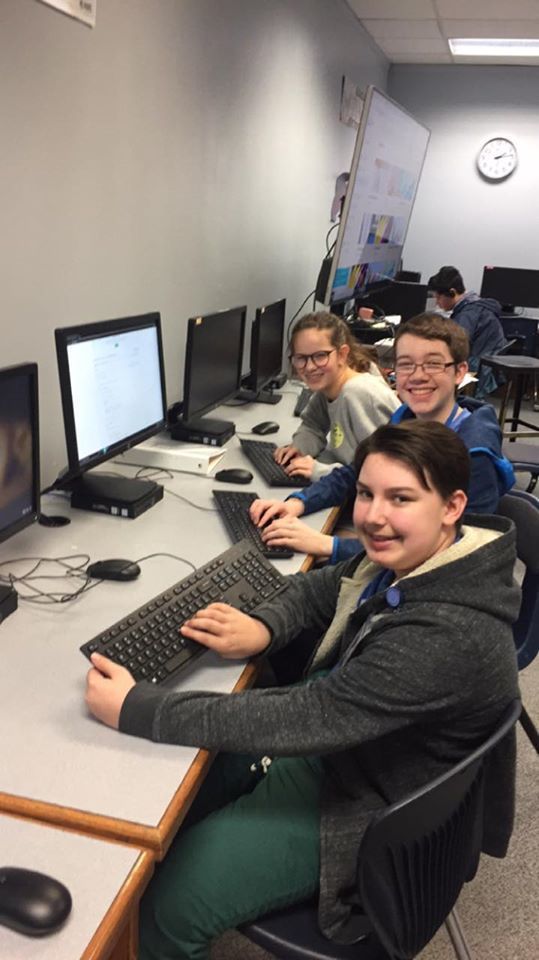 Jackson Daniel, Audrey Shellhammer and Connor Simmons were surprised to say the least. The Central Junior High students entered Governor Asa Hutchinson’s All-State Coding Competition hoping they would do well but they were all stunned when they were among the final 17 teams to advance.

Daniel, Shellhammer and Simmons were even more amazed when they learned they were the only junior high team selected to advance. It should be noted that many high schools in Arkansas have ninth graders on their campuses. Springdale still has eighth and ninth graders at its junior highs. There may be other teams that feature ninth graders but none other than Central have an eighth grader. Simmons is in the eighth grade.

“This was totally unexpected,” said Simmons. “We didn’t completely finish so we didn’t think we would advance. It is exciting.”

Daniel added, “We were in disbelief since we didn’t fully finish. We were all happy when we found out. Of course, now we don’t know what is next because we aren’t in school. We are supposed to find out more by April 17.”

The Arkansas Department of Education Office of Computer Science used a rubric to score each team that participated in the Feb. 28 regionals. Springdale has two other teams in the finals.  Har-Ber High School’s team of Samuel Lonneman, Jesse Ford and Melvin Vizueth and Lucas Keller, James Cassady and Benjamin Easterling, the team from the Don Tyson School of Innovation, also qualified.

“Congratulations to the teams that advanced,” said Governor Hutchinson. “This competition is an excellent showcase for our students’ creativity and I look forward to seeing the bright and talented students on this year’s teams demonstrate impressive levels of innovation and skill in coding.”

“We had never worked together before and now we have a much better idea of how the competition works,” said Daniel. “We were stressed by watching the clock the first time. That’s why we were so surprised to make it when we didn’t completely finish.”

While all three have enjoyed the competition and Wright’s classes, Daniel already is hoping to pursue a career in computer science.

“Working with computers is a way for me to express myself,” Daniel said. “I would like to make a career in computer science. Being able to use a computer in school every day has been helpful in preparing me for doing lessons at home, which is what we are doing right now.”

Simmons added, “Doing school from home is very different. It’s unprecedented. But, it’s not like we would do a lot of practicing together for the coding competition. There’s not a lot that can be done to prepare.”

Shellhammer noted, “We hope we will get the opportunity to compete again. The regionals taught us a lot. Learning at home isn’t the most difficult aspect of not being at school. The social aspect is much tougher. It’s hard to not be around your friends.”

Daniel, Shellhammer and Simmons are hoping they will be back in school soon and that the All-State Coding Finals will be held. No matter what, they and the teams from Har-Ber and DTSOI are sterling examples of why Springdale Public Schools are #THEChoice.